Along with Chris at Garudio Studiage, we developed a magnetic map version of the Dogs of London Map for London Design Festival.

“For London Design Festival 2014 Garudio Studiage build upon their highly popular ‘Dogs of London’ range and ‘You are Here’ award winning magnetic brooch with this interactive magnetic map installation of London. Finally here is your chance to put the capitals pooches in their places! The moveable dog illustrations allow viewers to match their favourite areas and animals.
Garudio Studiage invite you to delight in the hilariously uncanny matching of pets to the inhabitants of London’s post code districts.  Where do you think the crazy haired Chinese Crested, or the impeccably groomed Afghan Hound would live? Has the Peckham Pitbull finally had its day?”
We had to make it double sided so it would sit in the window of Volte Face, but visitors could still interact with it. This meant having an inverted version of London on one side, with equivalent dogs that could be moved from the back, but still moved on the front in the window display. It took may experiments with magnets and frustration at very strong magnets sticking to each other!!
More info on it here 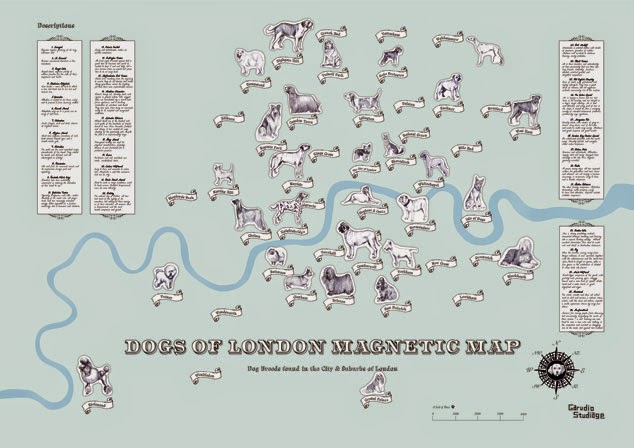