Another board game inspired piece I did earlier this year …finally getting round to posting this, having had a bit of a blog hiatus… must do better!

A take on a on the board game ‘Wallis’s New Game of Wanderers in the Wilderness’ published in the early 19th century, a hand coloured geographical race game describing the wonders to be found in South America, a place that would have been unknown and mysterious to most people then. My version describes an imagined vision of a re-wilded Britain, with wolves, bears, bison, lynx and more! Most of these animals have lived in this country in the past, or are being considered for re-introduction. I like the idea of not needing to go to the otherside of the world to experience mystery awe and wonder.

Although this alludes to an imagined landscape, there is still much around us that can inspire such feelings if we look close enough. Something that became more apparent  during the various lockdowns and people began to look closer to home for their entertainment and curiosity.

This is a handcoloured print, 420 x 594 mm. Archival digital print which is then handcoloured in watercolours. Not much room for mistakes when colouring in, so a bit of a challenge to get it right!

I am working on my Procreate skills using the ipad to ‘paint’, and hope to eventaully have a full colour digital version as well. ‘Painting’ on an ipad is quite a change from real life, so it might take some time to get used to! 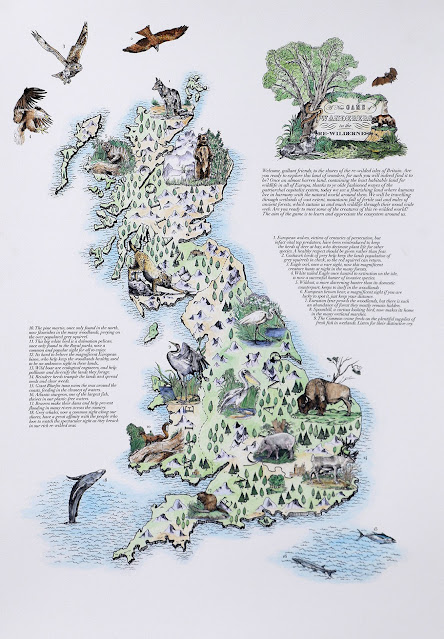