The amazing We Built This City will be re-launching very soon, and for it I designed 2 new London themed prints for Garudio Studiage. Both of them are bird based.

‘London Fancies’ is based on the London Fancy Canary, a unique variety of canary bred in London in the 19th century, deep orange-yellow with jet black wings and tails, which became extinct during the 1stworld war. Canaries were hugely popular with the working classes in London in the 19th century. One journalist described them as being sent to ’rejoice the hearts of us dwellers in cities’ with their ‘sprightly movements’ and their ‘joyous and irrepressible notes of ecstasy’ (source ‘Beastly London’ by Hannah Velten).  This print aims to replicate that feeling, lifting the hearts of us city dwellers, inspired by natural history illustrations. 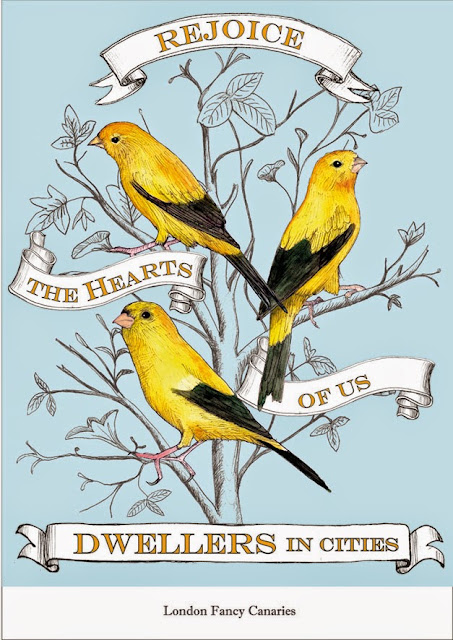 The second print is ‘ The East End Champion Chaffinches’.  Champion chaffinches was a cult activity with working class bird fanciers in the east end of London in the late 19th century. It took place in pubs where wild chaffinches that had been captured were pitched against each other in singing contests. The winner was the bird that sang the most complete tunes during the 15 minute matches. Shoreditch Bobby and Kingsland Roarer  were actual competitors, the  rest are imagined other participants! (source ‘Beastly London’ by Hannah Velten). The style is based on collectable cigarette cards, which came free in cigarette packs, and are still popular decorations in English pubs today. 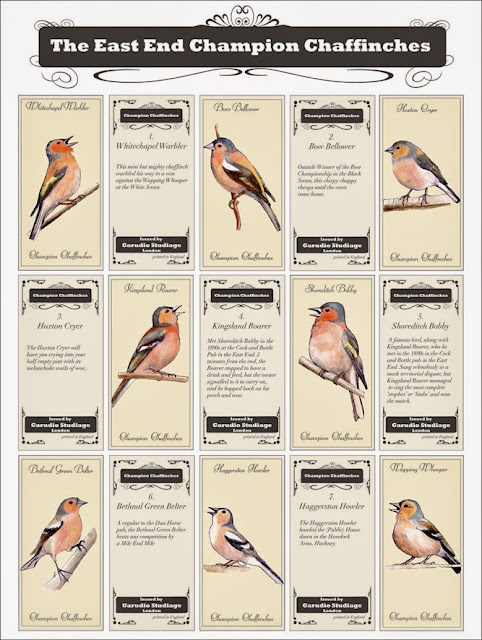