I went along to an amazing performance piece as part of Fierce Festival at the Ikon Gallery in Birmingham a couple of week ago. It was a piece called ‘Dachshund UN’ by the Australian artist Bennett Miller, which, in a nutshell recreates a meeting of the U.N. using Dachshund dogs (or sausage dogs as we love to call them). It was quite an extraordinary sight to witness, as 47 sausage dogs (plus extras to replace ones that were not enjoying themselves), appeared on a  scale replica of the former U.N. office in Geneva, and proceeded to bark, howl, hump, or just sit placidly staring at the weird humans gathered around them. Apparently Dachshunds are the only type of dog to have a ‘racial variety’ within the breed, and there certainly were many different varieties on show! More info on the piece here, watch a video of a previous performance of the piece here. Special, in a word. 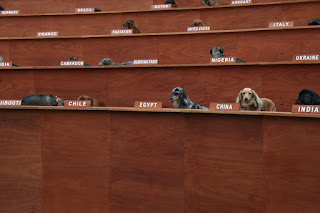